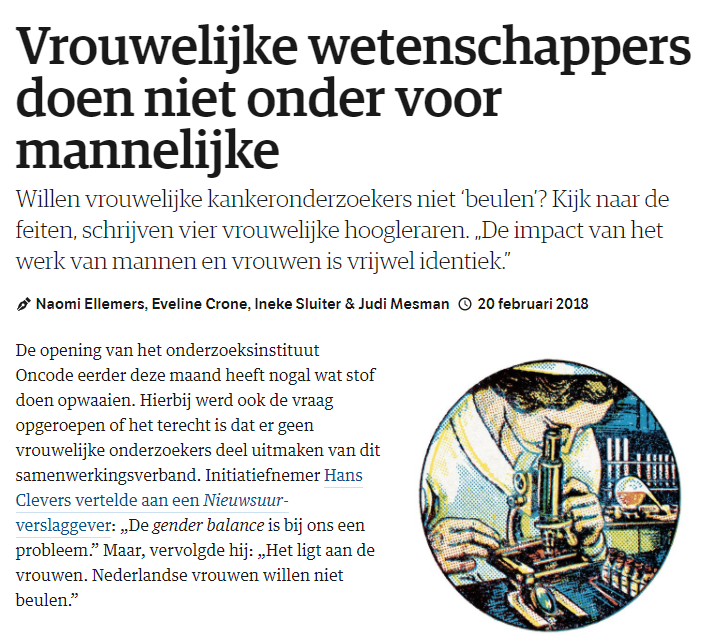 In NRC today, Athena's Angels react to the stir that has been caused around the opening of the Dutch cancer institute Oncode. When the question whether it is justified that no female researchers are part of this partnership was raised, initiator Hans Clevers told a Nieuwsuur-reporter: "The gender balance is a problem for us." But, he continued: "It's up to the women. Dutch women do not want to slave. "

The Angels respond to this by stating that it is necessary to examine the facts. An analysis by Thed van Leeuwen and Paul Wouters of the Center for Science and Technology Studies (CWTS) last week examined the publications in the Web of Science database, linking author names to gender. They selected publications from the field 'Oncology', published in the years 2007-2016, written by authors with a Dutch postal address. Their findings show that female scientists are not inferior to male.

Van Leeuwen and Wouters show that Dutch women's contribution (number of publications) to international literature has increased in the last ten years, from 17 to 27 percent. In the same period, the contribution of Dutch men has remained stable (35-40 percent, see Figure 1). The impact of Dutch researchers on publications in oncology (both the citations of their publications, Figure 2, and the impact factor, Figure 3, of the journals in which they publish) is significantly higher than the international average in the field of oncology. The impact of the work of male and female researchers is virtually identical. If there is a difference, publications by female researchers are quoted more often than those of their male colleagues.

So, we see that the actual performance of female researchers in Dutch oncology (measured by the number of citations of their work) is not inferior to that of their male colleagues. Yet the image persists - at least with Hans Clevers - that these women work less hard. This fits in a more general pattern that has been demonstrated several times in different countries in the world and in different disciplines of science. We seem to be unable to appreciate the scientific achievements of women. We keep seeing the same pattern, whether we look at actual decision-making (awarding of grants, decisions to appoint or promote someone), or to experiments that look at how people respond to the same CV under a different name (Jennifer vs. John), or on identical (online) interactions with male or female teachers. The findings are consistent and shocking. Female students and scientists are seen as less talented than men. If one thinks that a course is taught by a woman, the evaluation will be up to a point lower. Even though the research proposals of female and male researchers are valued equally, evaluators think that women are less good researchers, and they are less likely to be awarded research grants. And even when men and women have the same number of publications to their name, the women will still not be given a permanent or a higher position as often as men.

How can this be possible? There are several explanations. In assessments of performance, for example in evaluations and letters of recommendation, success of men is more often linked to their specific talent, whereas women's success is linked to hard work. Female researchers are less likely to be invited as speakers at a conference, and female conference speakers are less often introduced with their title. And the share of women in joint publications is systematically valued lower than the contribution of their male co-authors.

Clevers appears to think that it is mainly a matter of quantity: "This is a very competitive business", says Clevers, "we compete with [...] countries where researchers have less holiday [...] and work more hours in a week." Here too, data are available which put the importance of the number of hours invested in perspective. In order to be able to work innovatively and creatively, the diversity of employees, and an inclusive climate in which various contributions are valued, is crucial. Numerous studies in different countries show that problems occur more frequently in a very competitive and result-oriented work climate because people want to achieve their set goals. This can lead to jealousy, conflicts, health problems, but also fraud.

In a post-script on the NOS site (text in Dutch), Hans Clevers states that the playing field for male and female researchers is not level. Unfounded assumptions about the motivation and performance of female scientists form an important part of this problem. Let's stick to the facts. 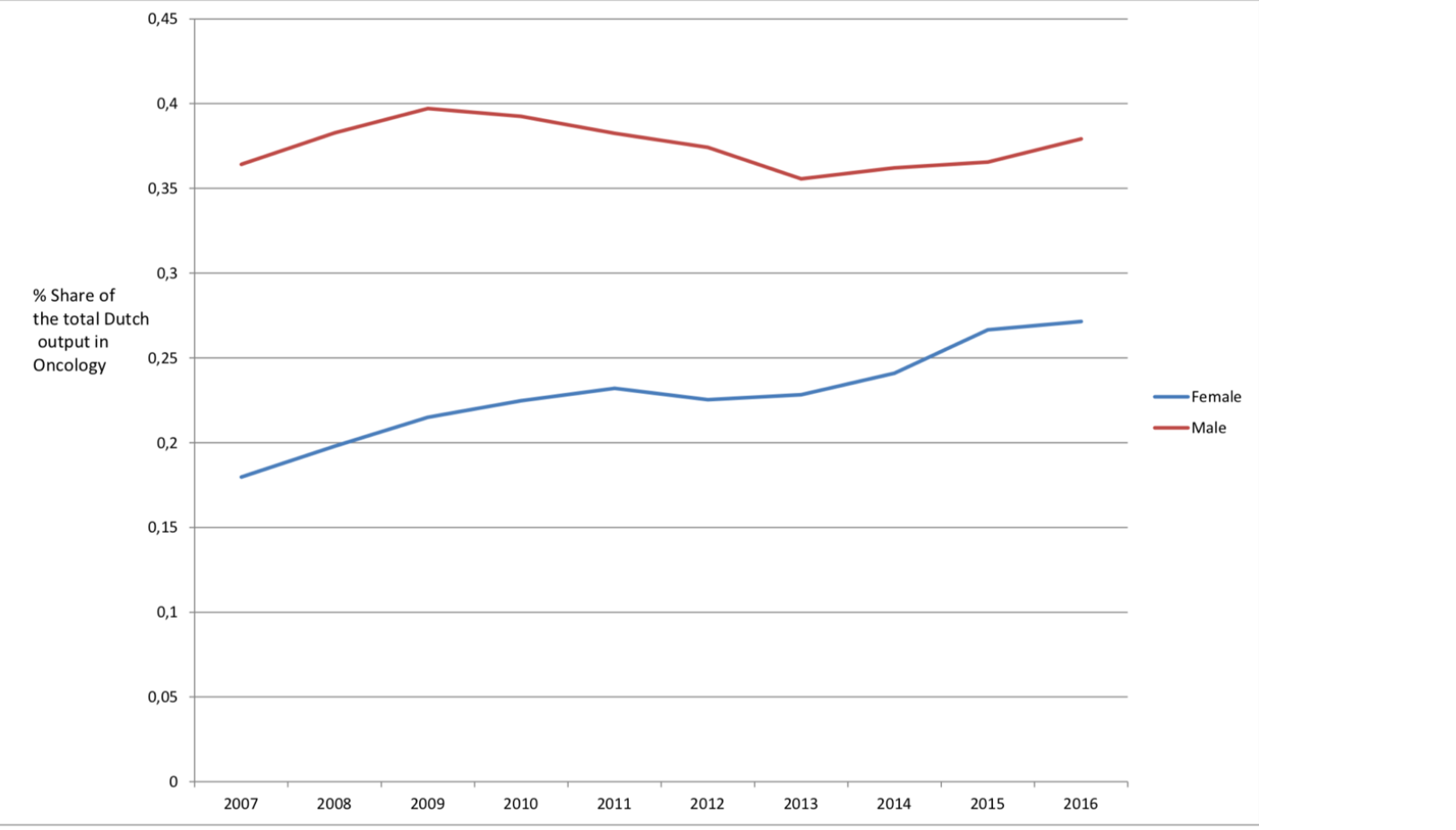 Figure 1. Contribution (number of publications) of Dutch men and women to international literature on oncology 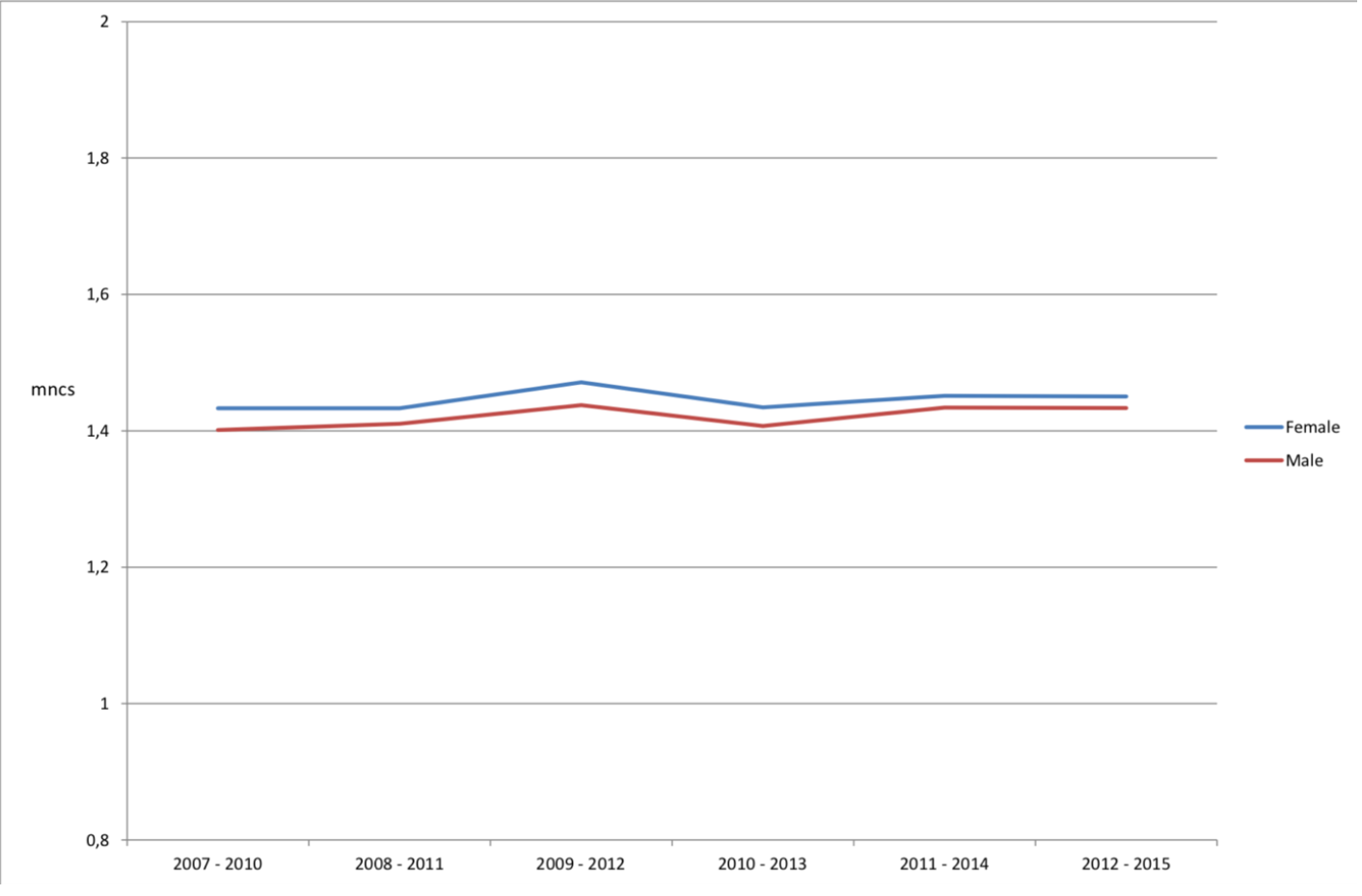 Figure 2. Development of impact scores (average of normalized citation scores) of contributions by men and women to Dutch oncological literature 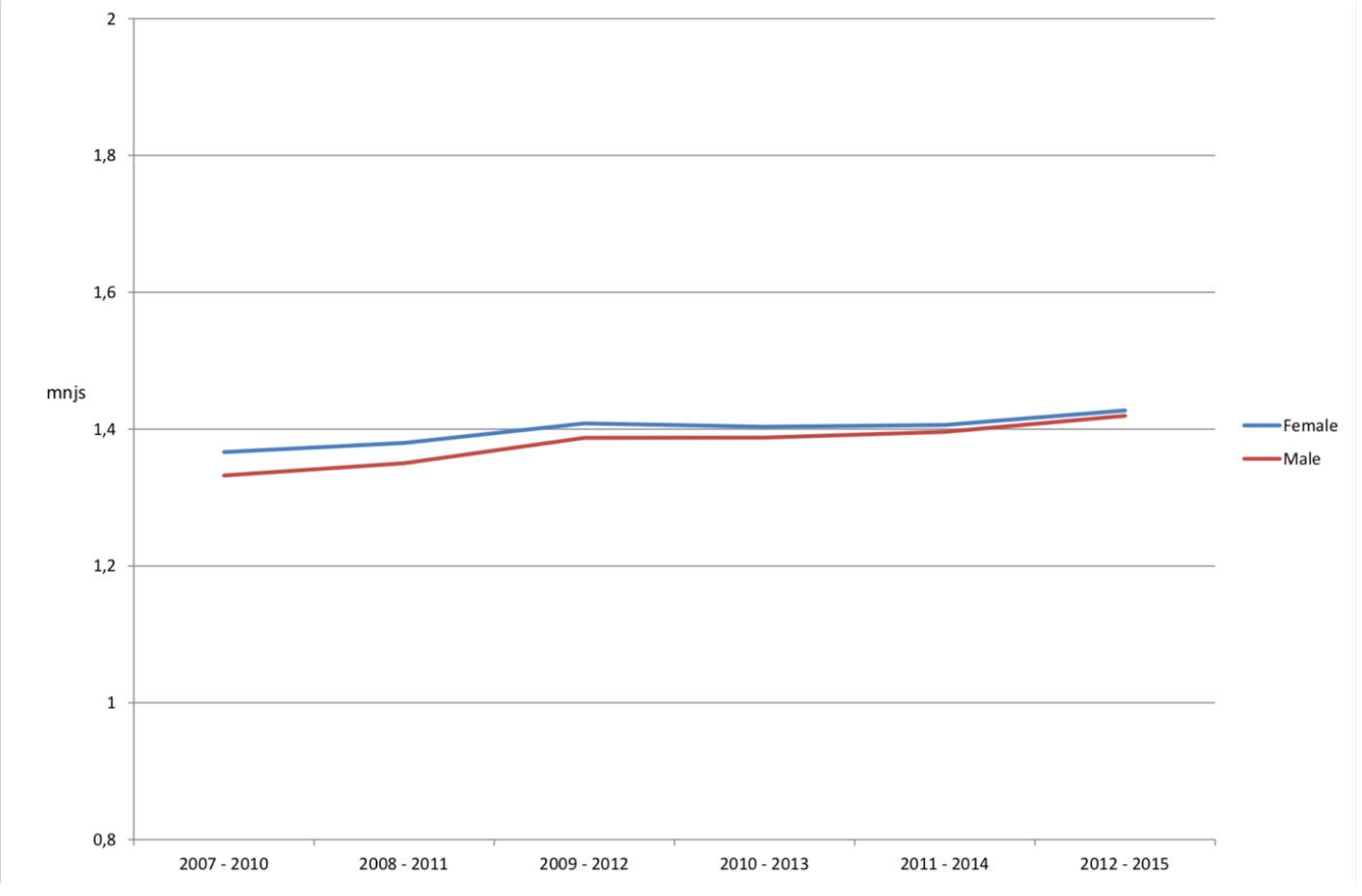 Figure 3. Development of impact scores (average of normalized journal impact) of contributions by men and women to Dutch oncological literature